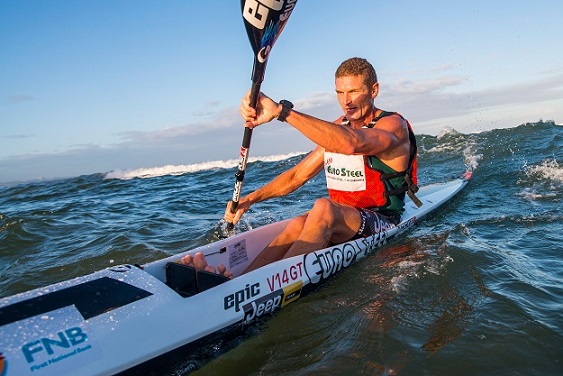 This is one of the few paddling titles in South Africa to have eluded the six-time Canoe Marathon world champion, something he is eager to rectify.

“The Durban Downwind is a race I’d love to win for sure.

Organisers and competitors will continue to keep a close eye on weather forecasts as they try to prepare for the weekend’s likely conditions.

“At this stage it looks like it might be a bit of a slog before having to deal with a bit of swell at the end. It doesn’t matter too much what conditions are like on the day really; if you’ve got the right mindset then you’ll adapt accordingly,” said McGregor.

His only previous appearance at the race was in 2014 when he looked well set to clinch the inaugural title as he led from the start to 100 metres from the finish.

However, he stumbled at the final hurdle when negotiating the colossal surf shortly before the finish at La Mercy beach proved his undoing and Euro Steel/Epic Kayaks’ Jasper Mocké claimed the win.

“2014 will definitely be playing on my mind as I prepare this week,” said McGregor.

The organisers aim to stage the race in the best available downwind conditions and, as such, a two-day window period has been set aside. A final decision will be made on the race date, start time and 26km course – either Marine SLC to La Mercy or vice versa – on Thursday morning.

While the majority of the focus will be on the singles, Durban’s affinity for doubles racing is likely to draw a healthy S2 field as well, an event that will run concurrently with the S1 clash.