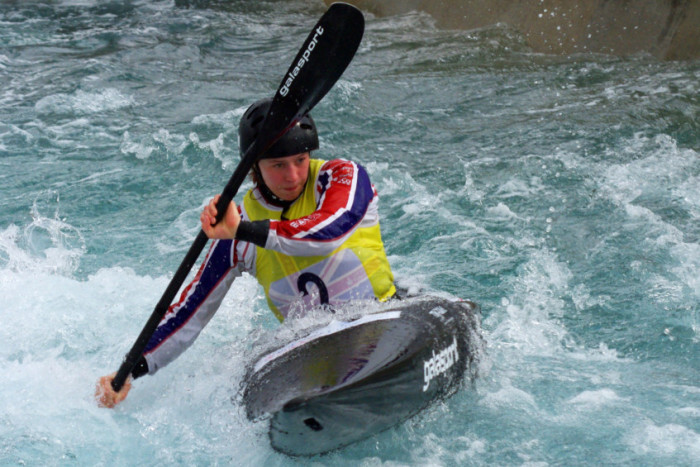 Kimberley Woods of the Rugby took part in the Canoe Slalom Premier Division race 9 of the 2016 season held at the Tryweryn White Water Centre at Bala in North Wales over the weekend. Kimberley was competing in both Canadian (C1W) and Kayak (K1W) categories.

The slalom site is on the Graveyard section of the river Tryweryn, 5 miles north of Bala. The river is dam released and provides a year round training and competition site dependant on water release from the Llyn Celyn dam. It rained all day Saturday but improved for Sunday with the sun coming out mid-morning. Fortunately there was no wind to move the slalom gate poles making the condition right for an excellent completion. The race was run to the international format with qualification heats on the Saturday followed by semi-finals and final on the Sunda.

In the K1W Kimberley made easy work of the technically difficult sections on the Qualification runs qualifying on the first run in first place with a fast time and no penalties.

In the semi-final on the Sunday, Kimberley was in first place with another clear run.

In the final she found some extra speed from somewhere outing in a sunning run 5 seconds quicker winning by a margin of over 4 seconds from her training partner Mallory Franklin.

In the Canadian class (C1W) Kimberley although making an error on gate 11 still set a good time on the qualification run placing her in second place behind Mallory Franklin. Kimberley did not make the same mistake in the semi-finals and had the fastest time.

In the final Kimberley again had the fastest time knocking 4 seconds off her semi-final run outing her in first place over 2 seconds in front of Mallory Franklin.

With still one Premier Division race to go this season at Teeside in two weeks’ time Kimberley has consolidated her position as number 1 in the National Ranking for the second year running.