Heather Williams has been appointed as the new canoe sprint performance manager at British Canoeing while Olympic champion Tim Brabants has also joined the governing body as chief medical officer.

A former international triathlete, Williams has been at British Canoeing since 2012 as talent pathway manager and is a key member of the senior leadership team.

Previously, she has held a number of performance roles at British Triathlon while she sits on the Archery GB performance advisory group.

"Heather has made a tremendous contribution to our world class programme during her time as the talent pathway manager at British Canoeing, including supporting the medal success that we achieved at the junior and under-23 World and European Championships in 2016," said John Anderson, performance director at British Canoeing.

"As we commence our Tokyo 2020 cycle I am delighted that Heather will lead our sprint performance programme and support our vision to be the number one Olympic and Paralympic canoeing nation, with strength and depth at every level." 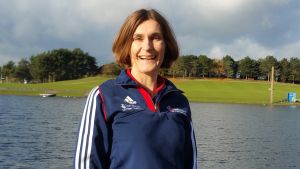 Williams will start in the post on Thursday (December 1) and will oversee the transition to a centralised sprint programme based at the National Water Sports Centre in Nottingham.

"I am very proud to be given the opportunity to lead the new canoe sprint performance programme and build on the success that we achieved as a team in Rio," added Williams.

"With 12 Olympic events in the sprint programme at the Tokyo 2020 Games there is a great opportunity for us to build on our success with the creation of the new centralised programme that will provide us with the best opportunity to support our athletes competing for medals."

In September, Britain won all three of the women's gold medals available as the sport made its debut on the Paralympic stage.

Brabants, one of the sport’s most decorated athletes, made history at the Beijing 2008 Olympic Games by winning Britain’s first ever gold medal in canoeing with victory in the men's sprint kayak 1,000m final.

A four time Olympian, he also won two bronze medals at the Sydney and Beijing Games and was crowned world and European Champion.

During a 15-year career he combined his sporting achievements with a medical career, working in the accident and emergency department at the Queens Medical Centre in Nottingham.

"I am very excited to take on this post within British Canoeing, supporting athletes who strive to achieve peak performance," said Brabants.

"My background as a doctor and former elite canoeist allows me great insight into the role.

"I look forward to working with a great team of support staff to keep our athletes in their optimum state of health and well being, despite the heavy stress placed on the body and mind through training."