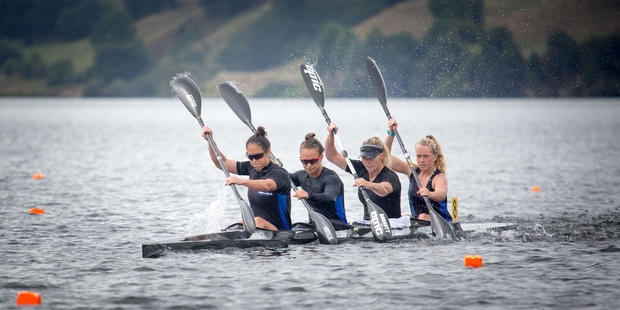 The Eastern Bay women's K4 of (from left) Jaimee Lovett, Lisa Carrington, Rachel Clarke and Carla Reid on their way to the K4 500m title at the national championships. Photo / Dscribe Media

Carrington, winner of two Olympic gold medals in the K1 200m at London in 2012 and Rio last year, along with winning bronze in Rio in the K1 500m, is one of eight women to be named today in two K4 crews as the women's arm of the discipline grows on the back of both Carrington and the burgeoning K4 paddlers.

Carrington may also race in two-seater events at the World Cups in Portugal from May 19-21 and in Szeged, Hungary from May 26-28.

Carrington, winner of the Supreme Award for 2016 at the Halberg Awards, has been among the most dominant paddlers in the sport in the last Olympic cycle, virtually unbeatable in the 200m sprint distance and a rapid improver in the classic 500m event. Now it's time to freshen up.

Several women are likely to be involved in the world under 23 championships in Romania at the end of July, and the rise among the women is at least partly down to the lead shown by Carrington, but also the K4 of the now-retired Jaimee Lovett, Aimee Fisher, Caitlin Ryan and Kayla Imrie who won a World Cup title last year and reached the final at the Olympics.

"The inspiration those girls have provided is fantastic because people see a different opportunity is presented," Walker added. "What the K4 did last year was fantastic. They absolutely maximised their potential and that's all you can really ask for. For New Zealand to have achieved in a short space of time is incredible. Women's kayaking is in a really strong place."

One possibility is Carrington and the highly-rated Fisher both racing the K1 200m events. Carrington may also have Ryan for company in the K1 500m.

Carrington had a good layoff after Rio but has been back in training for some time and is in good shape, Walker said.

"We're keeping a long term focus for what she'd like to be in a few years' time but making sure every day is as enjoyable as we can make it.

"The fun is still there, but it's a different type of fun. The things you enjoy and the challenges when you start up aren't the same as what they are now and to expect it to be the same is unrealistic. There's plenty of things for Lisa to work on and ways she can become better."

Carrington may have looked at the Hungarian champion Danuta Kozak, who took a couple of years out after the London Olympics to do two and four-seat racing to winning effect, before returning to single seat competition shortly before Rio.

She remarkably won gold in the K1, K2 and K4 500m in Rio, taking her to five Olympic gold medals to go with 11 world championship titles. The New Zealand squad leave for Europe this weekend.