Triple Olympic medallist Lisa Carrington has been awarded the prestigious Lonsdale Cup for 2017 following another year of dominant performances.

The Ohope beach local said she was honoured to receive the award following another successful year on the water.

"It’s a real privilege to be presented the Lonsdale Cup for the second year in a row. I’m really proud of last year’s results and this award represents a lot of hard work and determination."

2017 saw an increased focus on team boats for Carrington, who is branching out from the individual disciplines.

"I couldn’t have achieved these results without my amazing teammates. Racing in the team boats is a great new challenge for me and I’m loving being part of both the K2 and K4 environments."

"Our support staff are also amazing and what we do on the water wouldn’t be possible without them, so I’d like to pass on my thanks to them and everyone involved in the wider canoe sprint world as well." 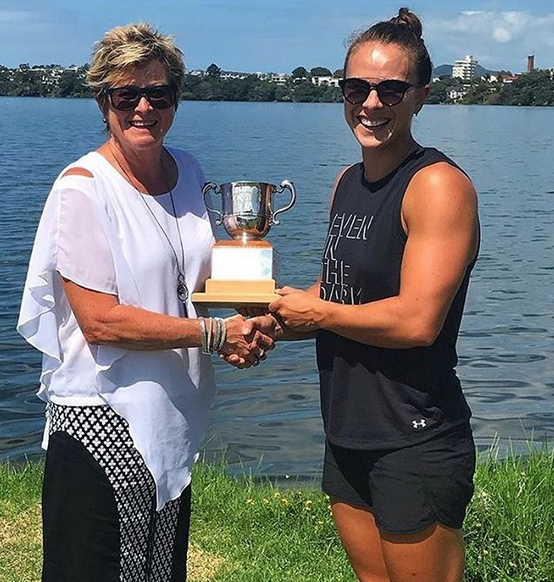 "Lisa is one of New Zealand’s most inspiring and hard working athletes. Her results from 2017 again demonstrate just what a force she is within her sport," said Smith.

"Winning the Lonsdale Cup two years in a row is a huge achievement. She joins Dame Valerie Adams, Ian Ferguson and Sir John Walker as the only athletes to have won the award in successive years."

"We wish Lisa the best for 2018 and I have no doubt that her success will continue for years to come."

"Lisa puts in a huge amount of mental and physical effort both on and off the water. Her success is hard earned and she hasn’t got to where she is without a lot of sacrifice and dedication."

"I’d also like to mention the work she does with young athletes within the sport. She’s very giving of her time and this puts canoe racing in a great place to go forward," he said.

Carrington is currently training in Auckland ahead of the 2018 international season.

About the Lonsdale Cup

The Lonsdale Cup was first presented in 1961 to Sir Murray Halberg.

Since then it has been awarded to outstanding New Zealand athletes including Sir John Walker, Sir Peter Snell, Barbara Kendall, Rob Waddell and Valerie Adams.

The Cup is sterling silver and of historic value, having its origins in a 1911 sporting festival between the United Kingdom, Canada and Australasia held to honour the accession of George V.