Marcus Cooper Walz: Since I won in Rio it has all been mad 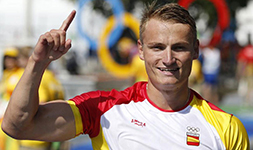 The Olympic champion 2016 tells about his new dreams – special for CanoeSport!

Marcus Cooper Walz is a Spanish sprint canoeist who has competed internationally since the early 2010s. He won the gold medal in the K-1 1000 m event at the 2016 Summer Olympics in Rio de Janeiro.

How did you get into canoe sprint? Since what age did you begin to paddle? Did you try yourself in the other sports?

I live near the sea, in Mallorca, so it's difficult not to know about this sport. A friend of mine started to kayak around the port so I wanted to try with him. It was summer so I thought it would be a great plan to paddle around the bay but then I saw the competition team so I started to train hard with them and compete.

I tried football and basketball but I didn't like it so much as kayaking.

You are the Olympic champion! Tell us about your emotions? What are your new goals?

Since I won in Rio it has all been mad, interviews and houndreds of events and fotos. I have been invited to many national prizes. Now everybody knows me.

Now, after having a good break from training, I have started to train hard again for the new season. After winning in Rio my goals will allways be to win in the Europeans and Worlds but I know it's going to be very difficult to stay on the top of the podium every year.

In your opinion what are the strongest teams in the world? What are their advantages?

What are your favourite activities and hobbies?

I don't really have much spare time apart from training. I'm studying bussines, that’s my passion. I love going to the cinema or having a coffee with the old friends.

Tell us how do you get ready for the race? Do you feel nervous? How do you overcome anxiety and fear?

Well, I train extremely hard. I always say that training is 24 hours a day. Apart from training you need to have a strict diet and a good rest. I think I've worked very well on all these factors.

Anyway, you also need to be very methodical when competing. The olympic final has been the biggest I've competed in but maybe the race with less nerves and anxiety. I just focused in doing the best 1000m of my life. I wasn't thinking of medals or any position in concrete, just in doing what I have trained so hard for.

What do you love most about canoe sprint? If you don’t like something – tell about it as well.

The most I like is to compete internationaly with hot weather. I love competing and comparing myself with the rest of the world. What I like less is to train or compete in a cold and rainy weather, I hate it.

Do you think that your team is friendly and kayakers are close to each other? Is there a leader who motivates the others? Is the crew big?

My teammates are great, I train in the Spanish national kayak team and we all get on very well. We are all very different but at the same time very similar.

Our leader is our trainer, no doubt about that. We are a crew of 6 sportsmen plus the trainer, a physiotherapist, doctor, nutritionist and even a psychologist.

Do you need motivation to love sport and do your best? What is the best motivation for the young sportsmen? Wish something to the young kayakers!

I don't really need motivation, I love this sport. What most motivates a sportsman is to compete, I guess.

The young kayakers should know that the most important is to have fun when practicing this sport. Then have fun establishing goals and training hard to achieve them.

What is your main life-achievement for today?

Well, my main life-achievement in sports was to win an Olympic gold medal. I thought that would be when I'm a bit older so I could retire and carry on with studies or with a job. The thing is that with 21 years old I already managed to hit my sports-goal but I'm still studying so I'll continue at least till Tokyo 2020.

I'm studying bussines and economy, that’s what I like best. When I retire from canoeing I'll try and build a good company or firm.

Where are your friends from?

I have many friends from many countries, I have been competing internationaly since I'm 16 and one of the good things about practicing sport is that you make good friendships.

Have you heard about CanoeSport?

Of course I've heard about the CanoeSport. I feel grateful for all the fotos and videos you share. Please keep it going!